The concept of the ‘image of the child’ underpins a curriculum framework implementation draft, which Canada’s Nova Scotia government released in early 2018. The Department of Education and Early Childhood Development’s document is the first ever such document for the province. It is a solid read, spanning 97 pages and focuses on ages zero to eight.
It’s part of the Canadian Federal Government’s decade-long, $7B multi-lateral early learning and childcare framework.

Influences In Its Development

“This framework … sees children as curious, creative, full of potential, capable, and confident. It values and honours children for who they are today and for who they will become. It also values how all children’s families, cultures, and communities influence on and contributions to children’s learning and development.”
In short, it’s taking a holistic view of the child including cognitive, social, emotional and physical development, but also trumpets ‘play’. 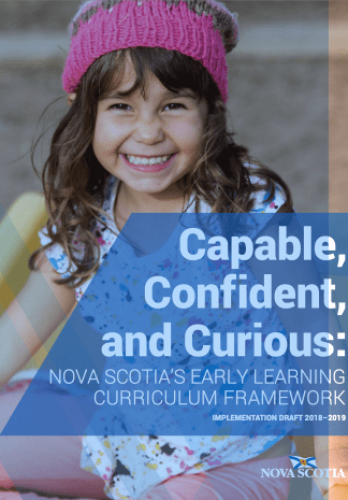 Speaking overall about the framework, she says: “It is a stellar example of what early childhood education could be if a country did it right … The Nova Scotia Framework emphasizes dispositions for learning such as curiosity, creativity, confidence, imagination and persistence.”

The framework tips its hat to frameworks of other Canadian provinces as well as New Zealand’s groundbreaking Te Whariki and Australia’s Early Years Learning Framework.

What’s driving the framework is to make early childhood education “accessible, affordable and inclusive”. The provincial government has pledged $35M over three years to early 2021 for the sector to create 100+ childcare sites and improve subsidies for parents, too.

The framework is broken up into these sections:

It encourages educators to build on their current practice to “extend and enrich children’s development, learning and care”. Here’s how you can do it:

The final framework was released in early Spring 2018. However, it is a living document that will continue to be reviewed and refined. There will also be a separate Indigenous Early Learning and Care Framework co-developed with Indigenous people.

Educa has the Nova Scotia Early Learning Framework integrated as a curriculum option.

Quality Matters (QM) is a province-wide assessment program that will be used to determine eligibility for funding for licensed child care centres, directly linked to meeting specific outcomes in the following: